Wednesday 17 July 2019 was a significant day for Luke Abbott and Rohan Abbott and for Seaview Lodge when they were initiated into Freemasonry and brothers became Brothers. 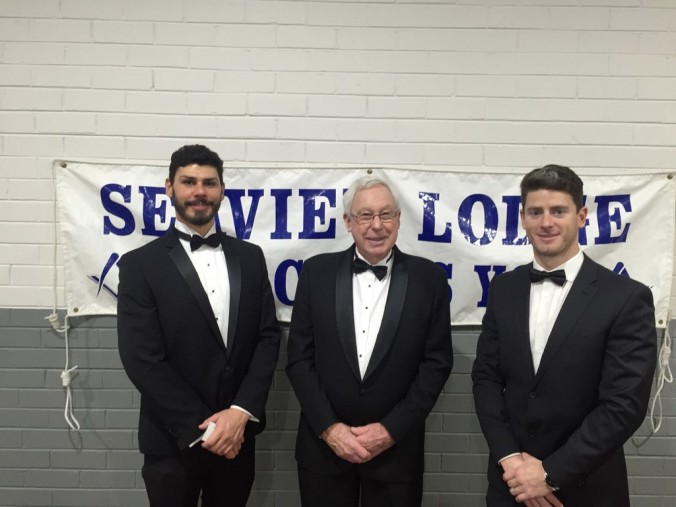 There were 21 Seaview members and 23 visitors in the Lodge to welcome Luke and Rohan into the Craft. The ceremony went very well with Seaview Master Masons doing most of the work viz:

Our Deacons, SD Bro Mike Maxwell and JD Bro Nic Covich did an excellent job in escorting the brothers around the Lodge. 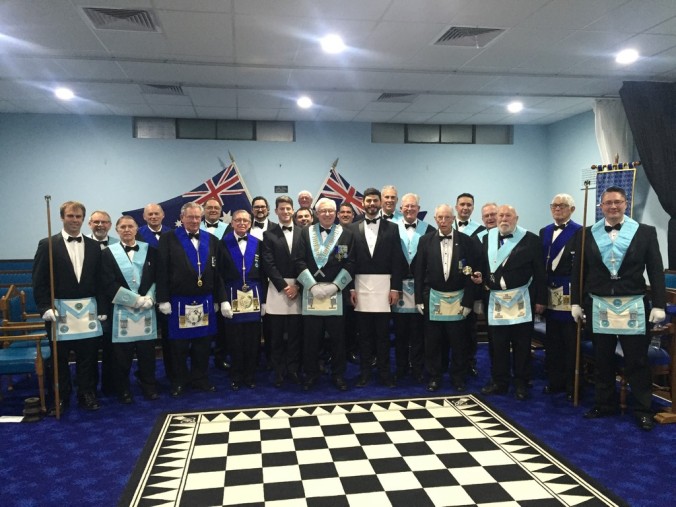 The Festive Board had a great vibe to it and Bros Luke Abbott and Rohan Abbott responded to the proposition of their toast from Bro Nic Covich in an excellent manner which bodes well for their futures as ritualists.

A great evening had by all.

After some time looking around for a suitable charity it was decided Seaview Lodge  would donate $500 towards The Harry Perkins Ride to Conquer Cancer. Desiree who works as a collector at Path West in Osborne Park would make the ride from McCallum Park, overnight Mandurah and back.

There was a ceremony at 6:00am at the start line at McCallum Park  where there were emotional and touching speeches from Cancer survivors and Harry Perkins. The total raised was $4.1 million with 830 riders participating. It took Desi 5 1/2 hrs on her 103 klm ride to Mandurah. The return journey was much harder with the strong winds and weather conditions, but she made it back to the finish line at 12:30. Desiree would like to pass onto all the Brethren of Seaview Lodge a huge thank you for supporting her in this very important cause. 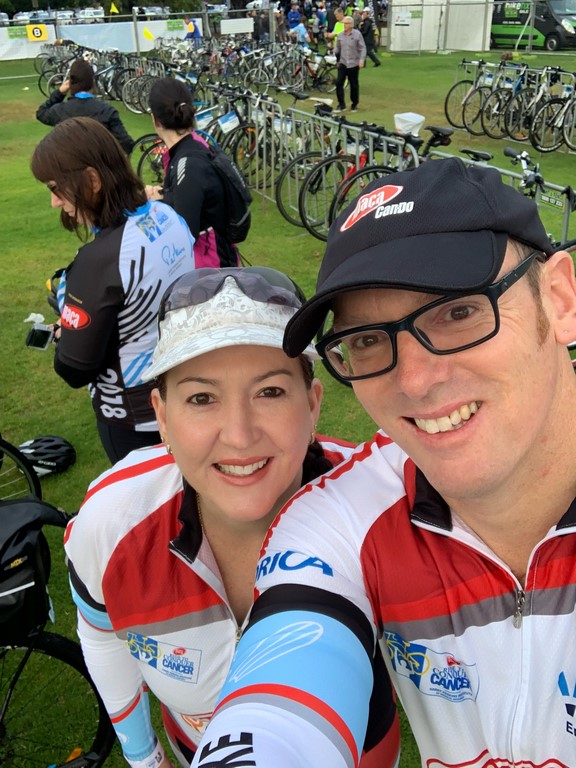 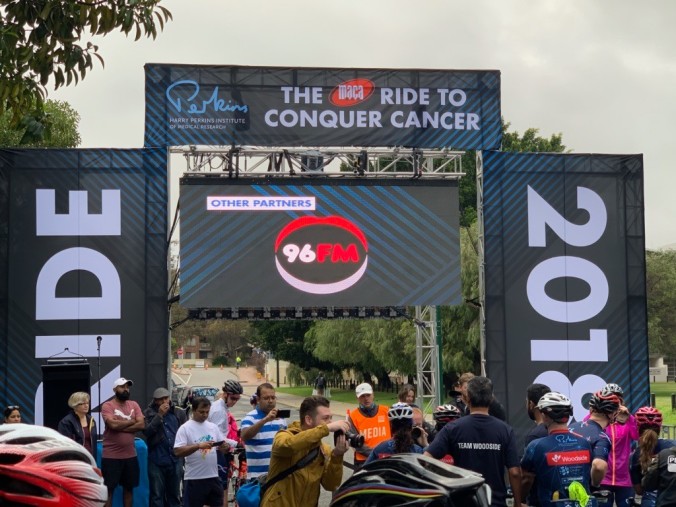 Start of the ride at 05;30 McCallum Park 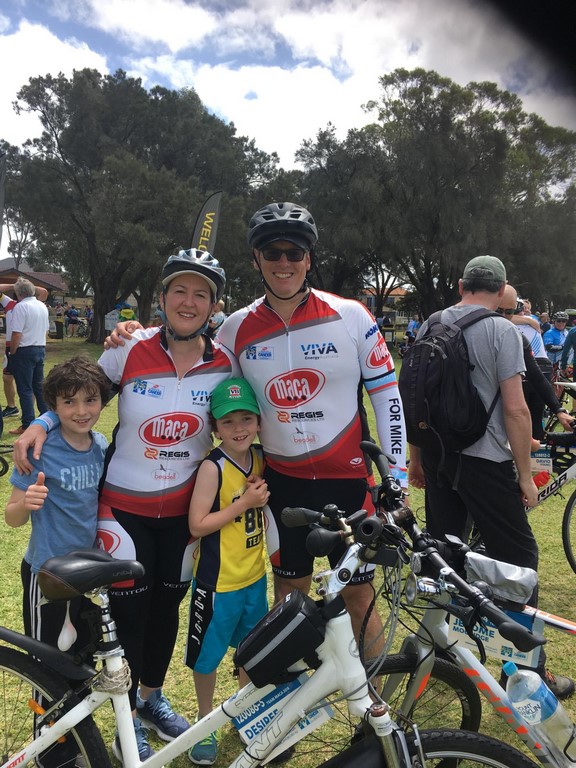 Arrived in Mandurah greeted by their boys 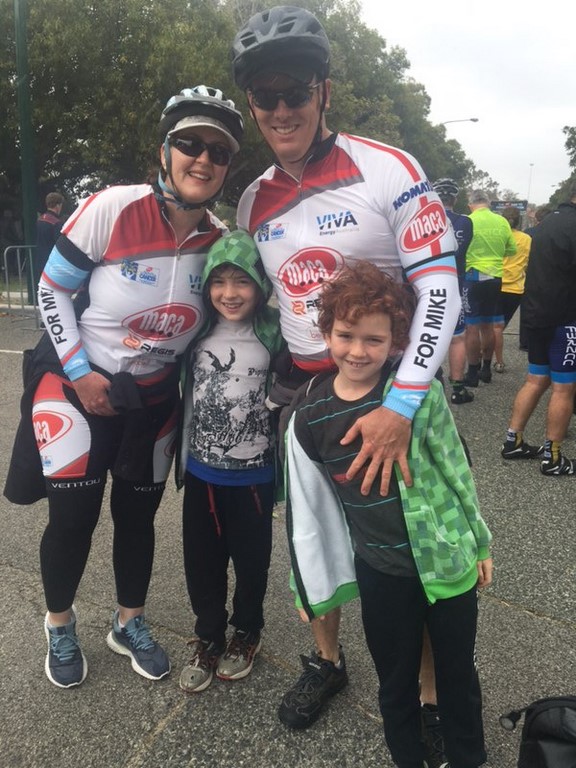 Another great Ladies Night was held at the TAFE Pavilion Restaurant this year. A few pics from the night out. 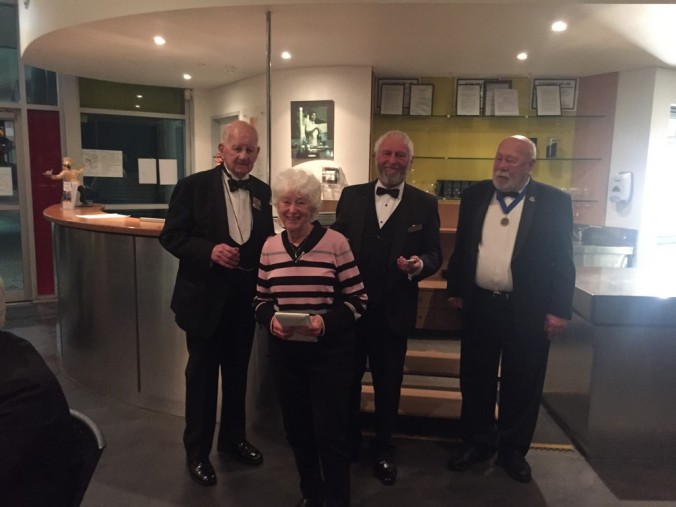 Our WM’s wife Gill responding to the toast to  the Ladies and acknowledging the traditional presentation of a scarf obtained from United Grand Lodge of England. 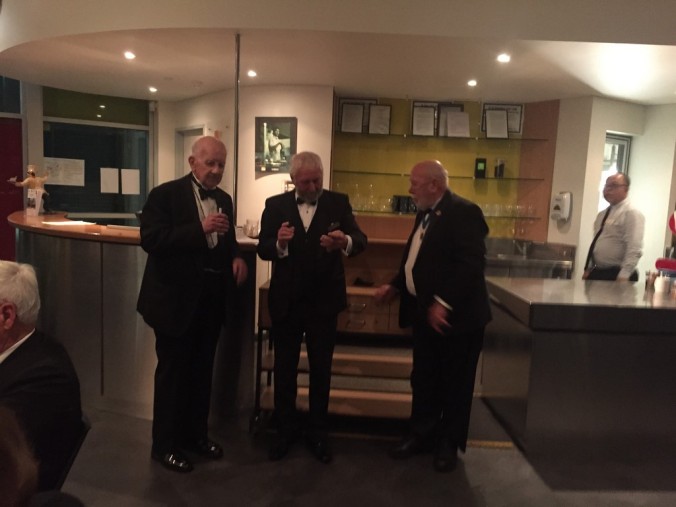 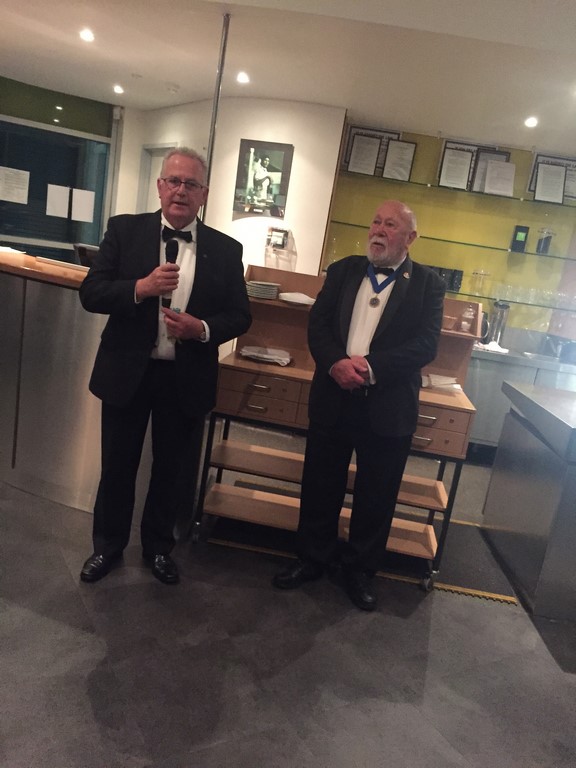 W Bro Mick Waterson (SGD) after being presented with a Jewel to mark his many years service to Seaview Lodge as Treasurer. The Jewel, which had previously been presented to W Bro Waterson’s father in law, was suitably inscribed and presented on behalf of Seaview Brethren by RW Bro Ian Mansfield (PSGW GMOM). 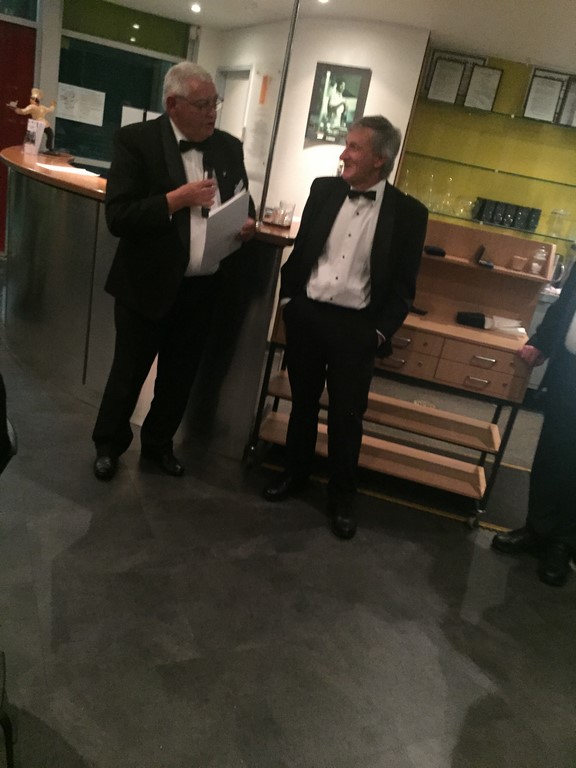 A very casual Bro Tony Woodcock (note hands in pockets!) being presented with his Grand Lodge jewel by RW Bro Lee Boyd (PDGM) to mark his 40 years in the craft. Tony was initiated in 4 July 1978 and has served the Craft wonderfully well – just a pity we couldn’t get him into the Master’s chair.

The annual pilgrimage of Brethren from Seaview Lodge and this year accompanied by Brethren from Hale with Justice Lodge left Perth in the Grand Lodge Bus at 6.00am on Thursday 6 September.

First stop was Dalwallinu where the group visited the memorial to Freemasonry in the main street of town – a very tastefully designed tribute to Dalwallinu Freemasonry with the Lodge now being in recess. Would recommend to any Masons driving through Dalwallinu that you stop and have a read of this very well done contribution to the history of Freemasonry in that District. 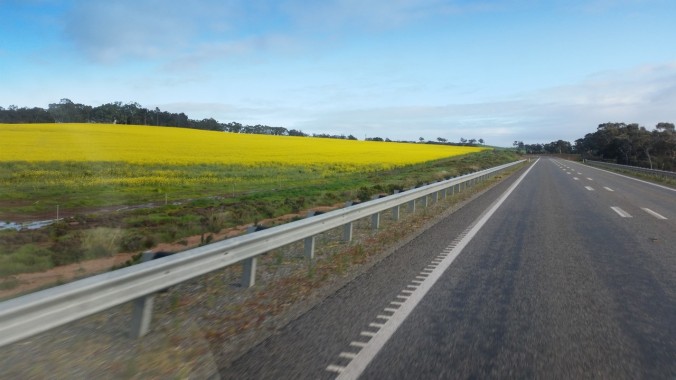 Onwards through the wildflower area from Paynes Find to Mount Magnet and a quite disappointing array of flowers – apparently great further west but not so great where we were.

Fair to comment that some members of the party were a great deal more circumspect in terms of keeping their bodies hydrated this year than last year – seems that you can teach some old dogs new tricks!! 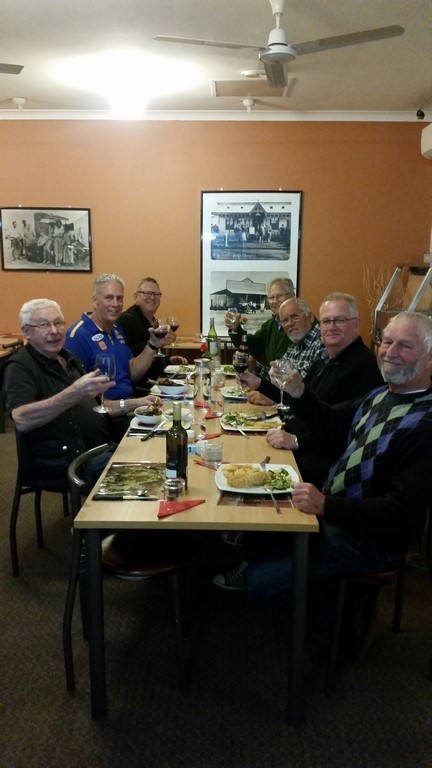 Up early on Friday and , disappointingly, the mobile food van which was such a hit last year in Meekatharra, was not operating this time.

Arrived in Newman about 1.00pm after the compulsory stop in Cue to visit the old Masonic Hall – built in 1899.

VW Bro Les Troman (Corinthian Family Lodge) was picked up the airport and joined us at the SES Dongas. 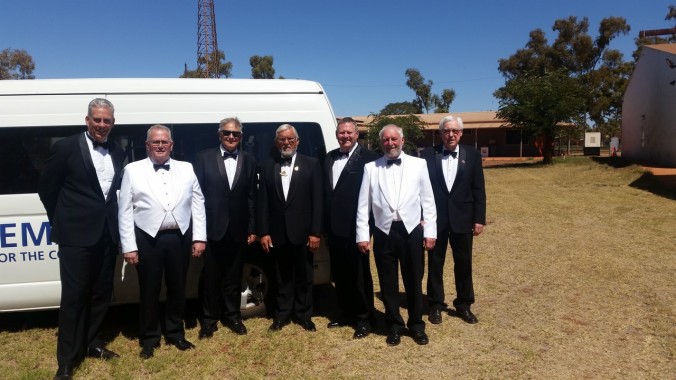 Bro Jamie Holloway spent the evening singing the Melbourne Football Club team song – not sure why!

On the Saturday morning RW Bro Peter Kirwan conducted a Deacons training course which quite a few members attended including a very keen EA from Capricorn – this young man spent most of Friday night with the Tyler (VW Bro Coomber) and again on Saturday for the Installation, also attended the Deacons session and was first up on Sunday morning to assist with the cooking of the recovery breakfast. Sadly, for Capricorn, he is leaving Newman in 6 weeks or so and , hopefully, Seaview will become his new Masonic home.

The reports on the Installation were glowing with WIO W Bro Adam Majid and the new WM W Bro David Evrett both performing their roles with distinction. At the Festive Board and, after the usual toasts, RW Bro Mike Claydon was presented with the Mulla Mulla Award for his services to Freemasonry in the Pilbara.

On to the Seasons Restaurant for the usual lovely meal and Capricorn’s traditional large raffle which raised in the order of $2,700 which included an auction for a beautiful pearl from Willy Creek Pearls.

During the evening W Bro Mick Waterson was presented with a Pilbara Ambassador award in recognition of his support of Capricorn Lodge through his regular pilgrimages to Newman. 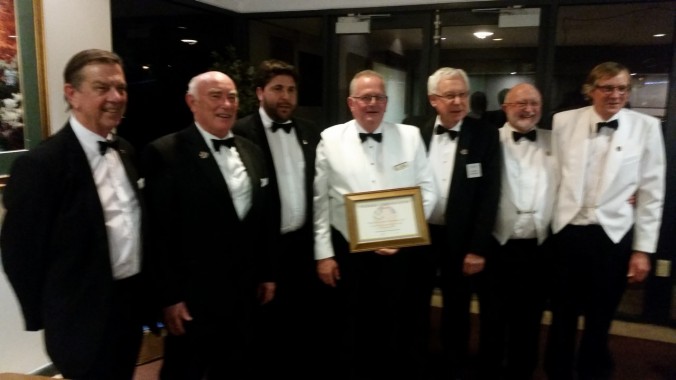 Fair to say that W Bro Waterson was very emotional when receiving the Award – as indeed have been all the previous winners. Seaview now has three recipients of this award – RW Bro Ian Mansfield, VW Bro Lauder Coomber and now W Bro Mick Waterson.

Up and at it early on Sunday morning for the recovery breakfast and the bus hit the road for Perth at 7.15am and arrived safely home at about 8.00pm.

Another wonderful experience in the Pilbara – great fellowship and the establishment of new Masonic friendships. Role on next year.

W ell –  here we go again on our annual pilgrimage to The Capricorn Lodge at Mt Newman. All gathered at Lauder’s house on time and ready to depart in the Grand Lodge bus. 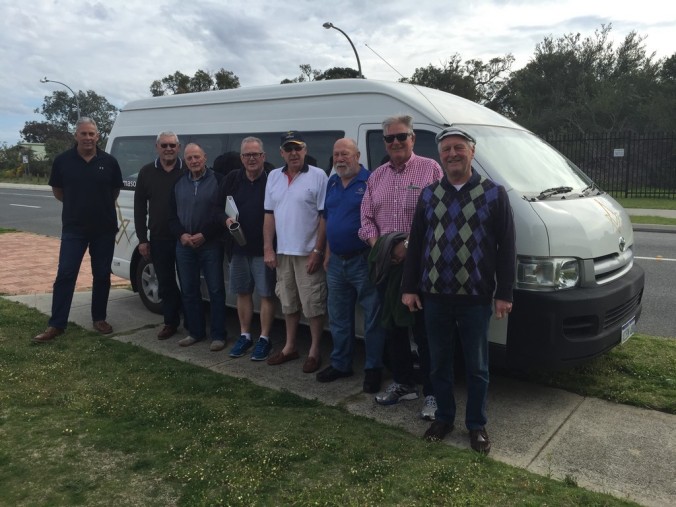 The group left at 9:45am on Thursday the 7th of September making good time for our overnight stay at the Meekatharra Motel. We all enjoyed a splendid meal in the restaurant followed by some good banter back in one of the rooms – all had a good nights sleep. We departed Meeka at around 8:30am next morning after stopping at the local food van for egg and bacon rolls and coffee for breakfast – which are highly recommended. 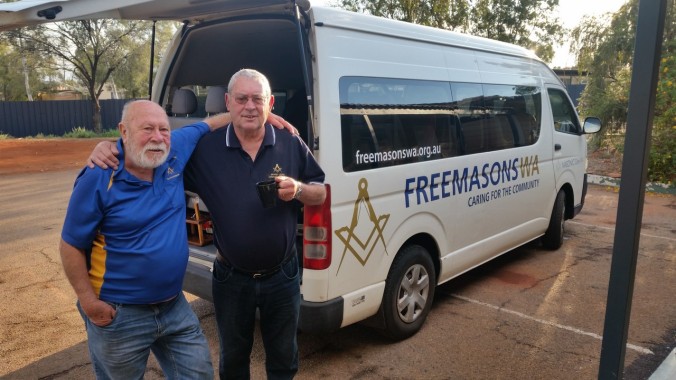 Ian & Graeme at Meeka next morning 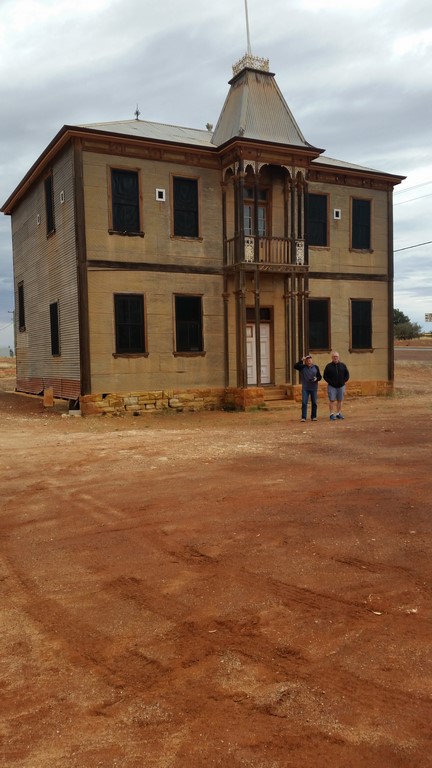 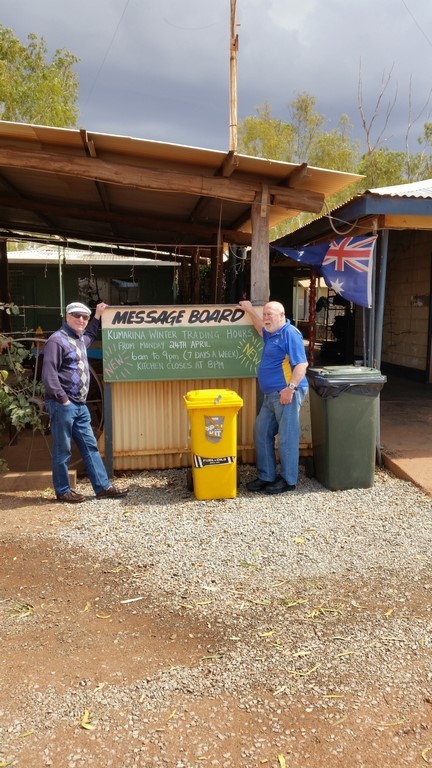 We arrived Newman around 1:00pm on the Friday and booked into our accommodation at the SES dongas, where we all enjoyed a well deserved rest before the ceremony that evening. Bro Michael Hess & Bro Grant Berry were raised in a double 3rd Degree ceremony, with visiting Brethren from the touring party filling many of the positions for the ceremony.  This was followed by a terrific night in the South where all enjoyed themselves. We all went back to our accommodation after the ceremony in good spirits and sat up for some time reflecting on such a grand day we all had. 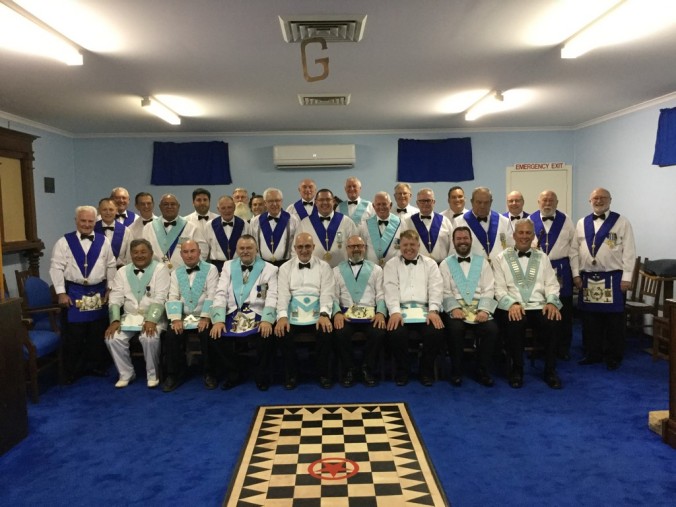 Saturday was a day getting prepared for the Installation of the WME Bro Adam Majid, plus some site seeing around the district. We all headed off for the Lodge rooms where the ceremony was due to begin at 1:30pm. It went off like clockwork with everyone doing a great job, as did a short time in the South where speeches were made and some light refreshments were enjoyed before heading to the Sessions Hotel for a more formal evening. A fabulous night was had by all with the Hotel putting on a wonderful meal and refreshments.

A few happy snaps of the evening 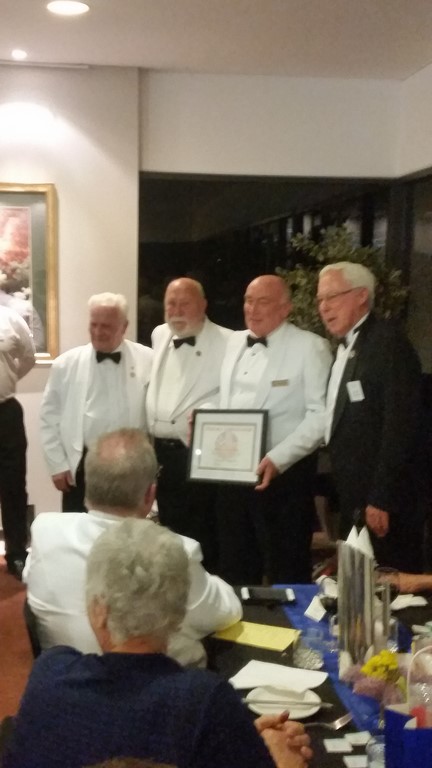 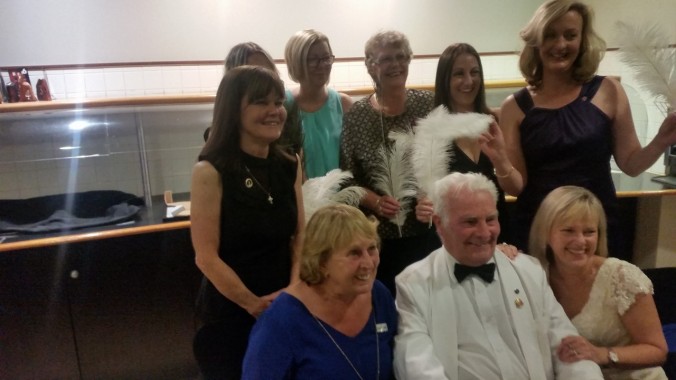 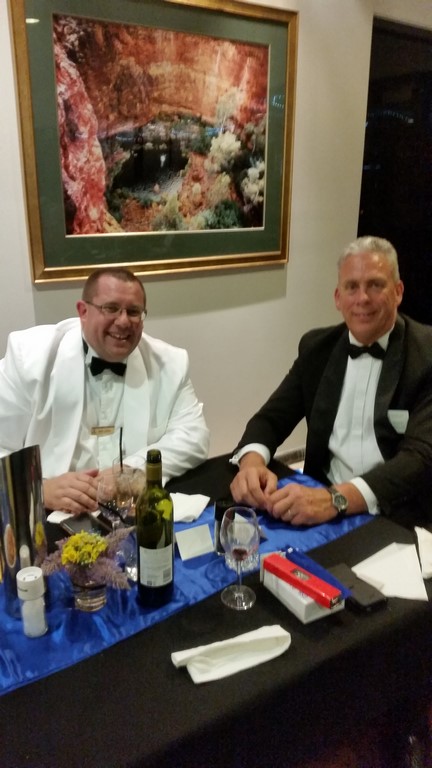 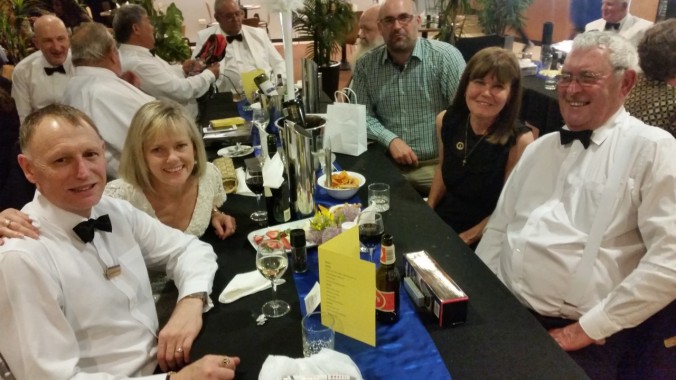 The night finished off as a resounding success, where the touring brethren again retired to their Dongas for a chat and reflection on a great night. 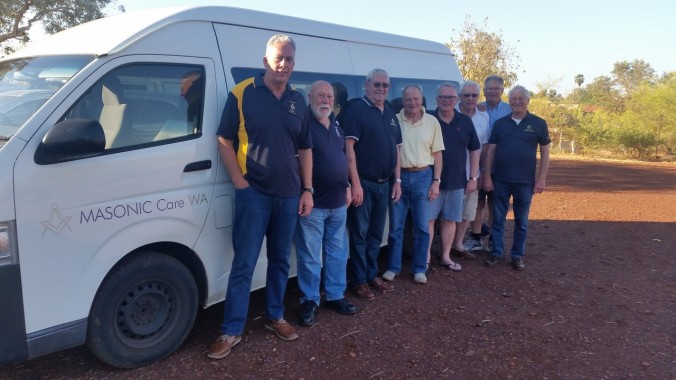 Getting ready to depart Newman

Next morning we were roused bright and early by Lauder, cleaned up, packed our bags and headed to the Lodge rooms for a BBQ breaky put on by the Capricorn Boys. We departed Newman around 7:30am arriving at Lauders at 8:00pm after an uneventful drive. We are all looking forward to the trip next year with any other Brethren who would be most welcome.

A  contingent of Seaview Lodge members attended the Raising of Bro Christian Lamb at the Lodge of Faith, Hope & Charity on Wednesday the 23th August.  Christian is the Nephew of the Junior Warden at the Seaview Lodge – Bro Jon lamb, hence the connection. A terrific night was had by all within the Lodge rooms and in the South.

Congratulations to Bro Lamb on becoming a fully fledged Freemason. 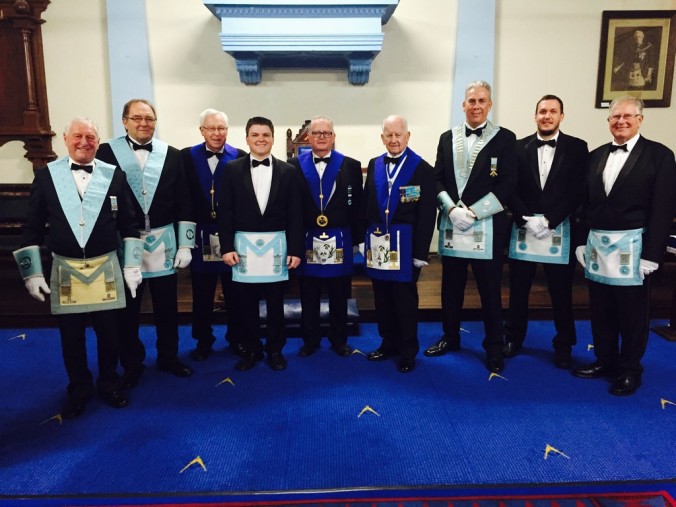 The meeting was attended by Representatives of the Grand Lodges of England, Ireland, Scotland, Western Australia, Togo, Benin, Guinea, Mali, Mauritius, Ghana, Mozambique and Nigeria.  This group included five visiting Grand Masters and, as the representative of our Grand Master, I was received with a Head of Delegation status.  The festivities commenced on the Friday night with a reception for Heads of Delegation and Partners and at which I was placed on the same table as the Deputy Grand Master elect and the representatives of Ireland and Scotland.

At the Grand Installation on Saturday afternoon, Western Australia was the fourth senior Grand Lodge, and each Head of Delegation was escorted into the Lodge room by the Grand Master of Ceremonies and introduced to the GM and GM elect.  The layout of the Lodge room reflects the continental origins of this Grand Lodge with the two Grand Wardens seated in the West and entry made between them.  The ceremony itself was interesting and quite different to our own.  The GM elect was escorted in by an Escort of Honour comprising the five GMs and the representatives of UGLE, Ireland and Scotland.  Grand Officers in GL South Africa (GLSA) wear light blue regalia.  GLSA has five Provincial Grand Lodges and they are distinguished by gold regalia with gold bordered aprons and gold collars.  Several of the visiting GLs show a green background indicating their links with Ireland or Scotland as most of the west African countries had Irish or Scottish Districts.

To celebrate, Saturday night was devoted to the Grand Banquet.  The hospitality of GLSA could not be faulted and serves to highlight the international nature of Freemasonry

Submitted for our web page by RW Bro Trevor Arbuckle with many thanks.

At our last two meetings on the 19 July and 16 August the Lodge had the privilege of Raising Bros. Jake Richards and Paul Thornbury to the Degree of  a Master Mason. Ceremony on both occasions were completed in an excellent manner, where both candidates thoroughly enjoyed the night.

On a more sombre note, the Lodge retired the Apron of W Bro Grahame Myers Manoy after his passing in July. W Bro Jim Eyres read the Eulogy and recited the traditional Ode. 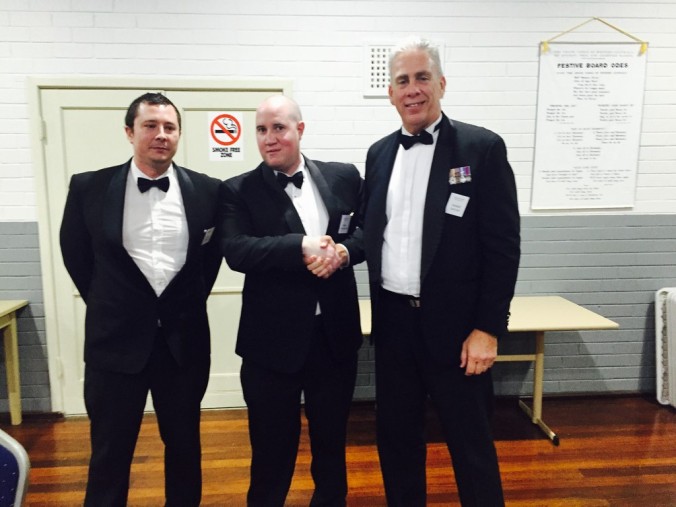 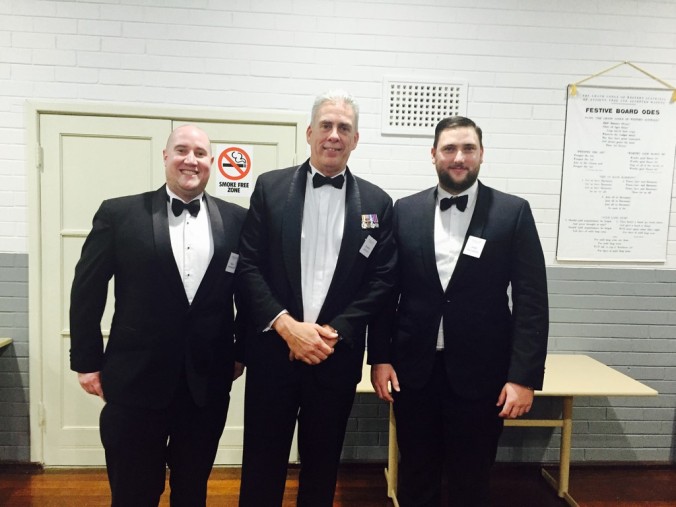 Congratulations On Becoming  Fully Fledged Freemasons, And completing Your Entrance Into The Masonic Order